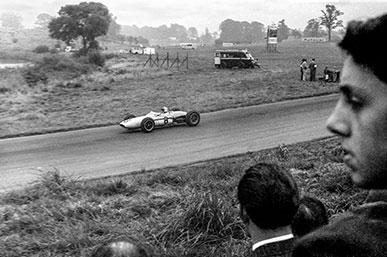 Previously unseen  pictures from the 1963 Formula One Oulton Park Gold Cup have been added to the Mike Hayward Collection of classic British motor sport images.

I was aged 16 at the time I took the photographs, stationed on our home-made stand at Knickerbrook and armed with a borrowed Voigtlander Vito B rangefinder camera.

The race was one of the many non-championship Formula One races that used to be a regular feature on the British calendar.

It was run over 73 laps and was won convincingly by Jim Clark in a Lotus Climax 25 in 2 hours 2 mins, which is much longer than a modern grand prix.

Clark clocked the first 100mph lap of the Cheshire circuit, finishing over 22 secs ahead of BRM team-mates Richie Ginther in second place and reigning world champion Graham Hill in third.

Pictured right is Innes Ireland who went on to miss a gear change and blew up the engine of his Lotus BRM.

After watching wins in the supporting races for Dan Gurney in a Ford Galaxie and Roy Salvadori in a Cooper Monaco, it was time to head back home before taking my film to the local chemist to be developed!