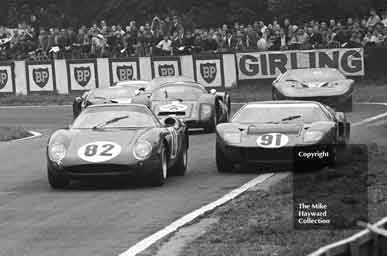 Paul 'Hawkeye' Hawkins was killed at Oulton Park on this day, May 26, in 1969. I photographed him in action on a few occasions and he was never anything less than spectacular.

He was at his best in sports cars, driving for Ford, Porsche and Ferrari works teams in addition to his own cars.

The picture seen right is of Paul with two wheels on the grass at Old Hall Corner at Oulton Park. His own GT40 is side by side with David Piper's Ferrari in the Gold Cup sports car race in 1967.

I also photographed him at Mallory Park in 1964 driving an F2 Alexis Cosworth. My picture shows Hawkeye following Kurt Ahrens in a Cooper Cosworth.

Another Oulton Park shot is of him driving a Lola Cosworth T55 F2 and battling with David Prophet, on the way to 5th place in the 1964 Gold Cup.

Hawkeye was a great driver, and we could definitely do with a few more like him in the world of F1 today.