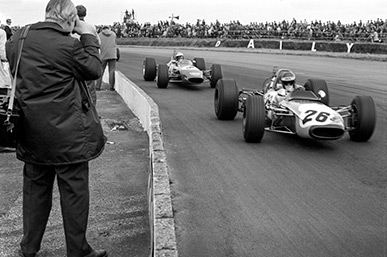 Ronnie Peterson features in three new pictures that have been uploaded to the Mike Hayward Collection of classic British motor sport images.

The photographs were taken at the Formula 3 Plessey Trophy race which supported the 1969 British Grand Prix, held at Silverstone.

Peterson - who is widely regarded as one of the best drivers never to win the F1 world championship - came third in a a Vicks Scandinavia Tecno 69.

He is pictured here at Copse Corner leading fellow Swede Reine Wisell, who took the fastest lap in a Chevron B15.

Tim Schenken was on pole with his Sports Motors Brabham BT28. Victory in the race went to Alan Rollinson in a Goodwin Racing Chevron B15, beating Tetsu Ikuzawa in Mike Spence’s Lotus 59 by 0.4 seconds.